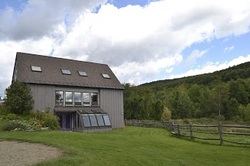 Photo courtesy of Marie-Claude Beaudette
Poker Hill School, founded in 1972 by Lucille Ingalls and Ann Crocker, opened in a remodeled old barn in Underhill, Vermont. Lucille and Ann, two experienced educators, shared a commitment to child-directed learning, a philosophy that continues today.
​
In 1978 Beth and David London and Gay Steimle purchased the school from Lu and Ann and continued to evolve the philosophy of child-directed learning in a farm based setting. In March 1983 a fire destroyed the original school building, a renovated 100 year old barn. The school relocated to St. Thomas Church while the school was rebuilt. After reopening in our current building in September 1983 the partnership of Steimle and the London's was dissolved and a non-profit corporation, Poker Hill School, Inc. was established. Gay left in 1984 and Beth & David continued to run the school while The Board of Directors evolved to include parents and teachers. During the next 29 years the school continued to flourish with many dedicated staff members leaving their mark including: Bonnie MacLeod; Amy Wise; Scotte Mason; Jo McClellan; Renee Slattery; Kyle Hibbard; Abby Shaker; JoAnne Denee; Mug Tomany; John Pulio; Gayle Massingham; Thule Shartie; Pat Nugent; Rita Clark; Lisa Sweet; Heather Ward-Migner; Emily Carson; Tamara Pless; Cathy DesRoches; Tracey Leavitt; Annie Casswell; Cass Repp, Kim Kezsey and Tess Granville.

During the 2011-2012 school year, The Board of Directors launched a capital campaign to purchase the school building and grounds from Beth and David London and leadership transitioned from Beth and David to Katie Amadon. Katie had several years of experience in early childhood education and a passion for supporting children’s growth and development. Katie teamed with dedicated staff members, many who had taught at Poker Hill School for many years and who are Poker Hill School parents.  Katie continues to work for Poker Hill School as the administrative director.  Kyle Hibbard was the director from 2014-2019, making many meaningful contributions to the school and the community.  Grace Marek began as the director in April 2019.  She graduated from Oklahoma State University in 2000 with a degree in English Literature. She has a Masters Certificate in Early Childhood Education Administration.  Grace worked as a children’s programming assistant at several libraries.  Grace taught at Poker Hill School from 2014-2017, and served as the Secretary and President of the Poker Hill Board of Directors.  Grace lives in Underhill with her husband Tony, and daughters Annie and Zoey. She enjoys volunteering in the community, reading, traveling, and camping. 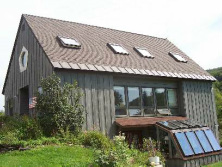 The Poker Hill School building includes floor to ceiling windows to the South and East, a library, dance room/ gym, playhouse, full kitchen, woodworking shop, greenhouse and areas for art, science, music, and dramatic play. Designed  for creative play, the playground has a large sand area, tunnels, a playhouse, swings, slides, tricycles and areas for climbing and running. There is also an extensive garden, a barn and a nature trail.
Powered by